Beneteau Sense 55 • Is the new Sense from Beneteau the ultimate single-hulled “mono-maran”? At the very least, it’s a mold-breaking new monohull built for luxurious family cruising.

On the Saturday afternoon of the Strictly Sail Miami show, Beneteau USA’s president Wayne Burdick and a few others played hooky from the show and slipped away for a sail on the brand new Sense 55. “Slipped” is probably not the right word, as we intentionally caused quite a stir—a stir that you can only make with the patented Dock & Go system that Beneteau now offers as an option on their larger boats.

Here’s what happened: we dropped the stern lines, and using the fully rotating sail drive unit aft and the bow thruster forward—both of which are linked to a joystick at the helm—Wayne maneuvered us forward so we could remove the bow lines from the slip’s piling. Then, he steered us into a fairly wide spot between the docks at the boat show and the opposing slips and proceeded to spin the beamy 55-footer in fast pirouettes that basically had her twisting herself in circles. To say we attracted a crowd on the docks would be understatement. People all over the show stopped in their tracks and watched with mouths agape. It was quite a display. 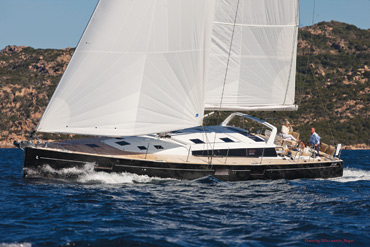 The Boat Show Review of the EXCESS 11