J/24s- The Female-friendly Class in Australia!

J/24s- The Female-friendly Class in Australia!

Our girls are doing it with style and fun, the J24 is a very female-friendly class and the boat can be sailed enjoyably and raced competitively by young and older women, something not many other keelboat classes can offer. Hugo Ottaway,  “Mr J24” and long time class sailor, takes up the story.

“Women have been sailing J/24s since they arrived in Victoria in 1982.  Our first international representative was Barney Hartnett who competed in both the 1986 Newport Rhode Island and 1988 Sydney J/24 World Championships. Since then women have represented the Victorian J/24 association across the board. Gai Clough, Commodore of Royal Melbourne Yacht Squadron and J owner won two Australian Championships.  She and Nikki Clarringbold represented Australia in the 1996 Worlds in Argentina; Nikki also sailed at the 2006 worlds in Sweden along with the all female crew of Kirsty Harris.  Kerry Dickerson and Diane Grimshaw crewed in the 1995 worlds in Sardinia and there are others I can’t recall. 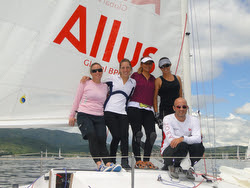 Built on this rich heritage of successful female participation, is a new wave of women who have embraced the J/24 as the weapon of choice.  Today, we see a group of females who not only equal the men in numbers, but also in talent.  Without a doubt, owner Robyn Coombs, skipper Kirsty Harris and crew are the best all female crew today, having won races in the Australian and Victorian Championships. In 2012 and 2014, two J/24 teams from Victoria represented Australia at the Dennis Conner International Yacht Club Challenge in New York (sailed on J/24s), in 2014 Alicia Ray was on one and Cherry Birch, who sailed in both regattas, was on the other. 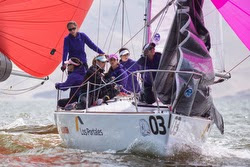 Our girls have progressively been making an impact, locally, nationally and internationally and it’s only going to get bigger. The J/24 is an ideal boat for Victorian conditions; here we have strong winds and an open bay that provides challenging conditions, the equal to any around the world. Due to their unique design the boat works perfectly with either all or part female crews. The class weight restriction of 400 kilos means the boats can sail with either 5 or 6 crew, this makes women crews competitive. Very few classes offer true International one design sailing, with strong competitive fleets in as many as 60 countries, that women can compete equally with the men.

In Adelaide, class stalwart Robin Townsend has long campaigned and skippered ‘Good Company’ with a mostly female crew and now with her newer J ‘Witches Thimble’ she continues to compete. In Cronulla, Sheryl Brighton and “the girls” compete – and win – club sailing in their 19 boat J fleet in “Cooee Two”. On Sydney Harbour and around the country, Jeanette Syme is a fierce competitor with her mixed crew. In Melbourne, we have had several young all female crews on our youth boats achieve great success. The names of many other female crews and skippers escape me but are too numerous to mention. 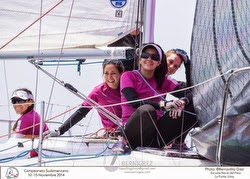 The name Kirsty Harris continually pops up throughout recent J folklore and this article and she and owner Robyn Coombs deserve special mention. In Robyn’s own words, “The Melbourne based ‘Hyperactive’ all girl crew joined forces in 2006 when Sarah Thompson and I borrowed a J/24 and competed in and won our first regatta, The Australian Women’s Keelboat Regatta. I decided this boat had to be ours! So, that’s where it all began! We have been predominantly an all female crew. Competing in many AWKR regattas at RMYS, WISC series at SYC, J/24 Worlds in Sweden, many J/24 Nationals and State Titles along with our one design racing on a regular basis out of SYC and recently competed in The Marley Point overnight race.

Kirsty Harris and myself are two of the original crew members. We had a stint of approx 2 years where we had one of the male variety sailing with us, luckily for us he was more than happy to don our crew colours of hot pink (which represents Breast cancer awareness) along with a colour coordinated mini-skirt for special occasions!  As you can see, it’s all about fun otherwise we wouldn’t be there. Saying that, we are very committed and competitive, to say the least. We are also very lucky to have a lot of support around the buoys from members and especially our past sponsors “Red Bluff Homes and Clearly Frameless” and present sponsor “Crystal”.

Sarah left our crew recently due to baby commitments and Mary has stepped in as the new partner. Our next big adventure will be in Mexico in 2016!  So, bring it on! Robyn Coombs Team Hyperactive – Kirsty Harris, Mary McCauley, Joelle Roderick, Amanda Alyward and Robyn Coombs.” 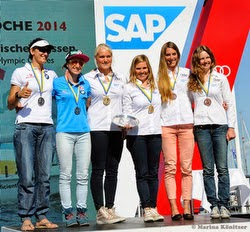 In Victoria, Sandringham Yacht Club is the home of J/24. The club has embraced the class and over the past 3 weeks we have had two new owners join us, swelling the ranks to 21. New owner, Eddie Ragauskas, has been joined by his wife and daughters as a team.

This growth is not without effort. Bruce Alexander, who owns a local J/24 has created a user-friendly Internet site- “Melbourne Sailing Meet up”(http://www.meetup.com/MelbourneSailing/)- which boasts over 1,000 members, 2/3rds of which are women. Says Bruce “this site allows potential crews to access sailing at the click of a button, without the intimidation of the yacht club walls. The Victorian J/24 class has grown and benefited enormously from this group”. Hugo notes, “on my boat I now have two women and one male, who all came from Bruce Alexander’s Meet Up site, thanks Bruce for that!!”  Here’s theirFacebook Melbourne Sailing page– https://www.facebook.com/MelbourneSailing. 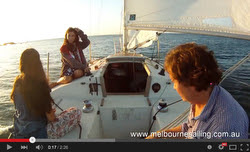 A recent Friday evening sunset cruise with three “new” sailors aboard the J/24 features the simple fun and camaraderie they are having- check out this YouTube sailing video here:
https://www.youtube.com/watch?v=vgKiTSu2aQg#t=77 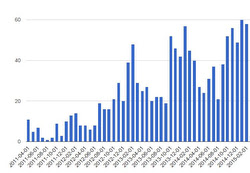 Bruce has provided several charts that have shown a rapid increase in interest in sailing J/24 yachts and women have made up the majority of that interest. I urge all J owners to look closely at the benefit and enjoyment of having either part or all female teams. Here is an indication of the popularity of Melbourne Sailing Meet Up and the interest in sailing J24s. Remember 2/3rds of these are women!