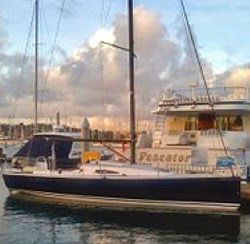 “It Was Love @ First Sight!”
(San Diego, CA)- As we covered in last week’s news, the J/88 is beginning to realize its enormous potential in offshore races in Southern California.  Having already won the Santa Barbara to King Harbor Race in its class, new owner Scott Grealish just took his J/88 BLUE FLASH to both class and overall honors in the Rum Runner Race- a 75m dash down the SoCal coastline from Newport Harbor to San Diego.  Here’s Scott’s report (download PDF version here- http://www.jboats.com/images/stories/pdf/J88_BlueFlash_Report.pdf):