J/BOATS and the FALL BOAT SHOWS

J/BOATS and the FALL BOAT SHOWS 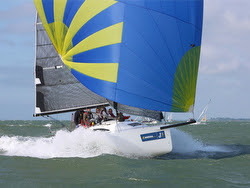 Fall Boat Show Time!
Featuring the J/70, J/97E, J/88 Oceanvolt, J/11S & J/122E
(Newport, RI)- It’s that time of year again to dream and plan for your new boat for next season. Both sailboat shows in Europe and America have several of the latest design iterations from the J/Design team that have come to fruition on both sides of the Atlantic.

The J/70 One-Design Speedster
The J/70 is the fastest selling sportsboat ever, with 900+ hulls built in the three years since her launch. She introduces a new dimension of fun, fast sailing in a stable, easy to own boat that all of your friends and family can enjoy. The J/70′s 22′ long waterline coupled with her high aspect, all carbon mast and boom provides extremely spirited performance with the kind of stability upwind that one would enjoy in a much larger boat. 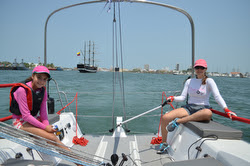 The J/88 Family Speedster
As the mid-sized boat in the J/Sport range, she is a 29 ft family speedster with stability, style and sailing comfort. The J/88 hits the sweet-spot– large enough to provide the creature comforts of a sit-in cockpit (the girls @ right love it!), inboard diesel, overnighting interior and head; and small enough to be single-point lifted, owner-trailered and stored!

The 88 re-defines what versatility means in an under 30’ sailboat.  On deck, the daysailing comforts include a spacious T-shaped cockpit similar to the J/111, with seating and backrests forward of the floor-mounted traveller and a wide-open cockpit aft due to the tiller-steered, transom mounted high-aspect rudder. Adding to J/88’s ease-of-sailing characteristics is an in-deck jib furler, retractable carbon bowsprit and cockpit-led sail controls. Below decks, the J/88 sports a weekending layout with two full length settees, Igloo cooler, galley sink, private head forward of bulkhead and optional V-berth.

Key Yachting have sold ten J/88s into UK waters, with most of the fleet in Hamble. The reason our owners have chosen these boats is that they are not only great performers, but they are easy to own and move about! 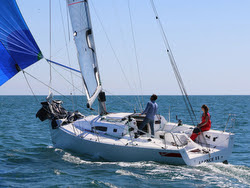 The J/11S Offshore
As the newest addition to the J/Sport range; the J/11S, will have its worldwide debut at the show. Answering demand for sailing without the need to assemble a large crew, the J/11S is a new 36’ (11 meter) double-handed, offshore boat designed to compete in the two-handed IRC circuit in Europe.

Built by J/Composites, the J/11S is based on the high performance hull of the J/111 and is then rating optimized for her length (from IRC 1.096 down to 1.050) with a shorter VCG optimized sail plan, increased stability, a twin rudder/single tiller steering system, and simplified deck and interior plan.

While most designs in this genre are focused on offwind sailing in windy conditions (i.e. max beam carried to the transom), the J/11S provides a versatile performance platform that’s ideally suited for most of the popular double-handed races in Europe, where wind and sea conditions vary widely, and where both upwind and downwind performance matters.

“J/Boat owners have had great success in short-handed offshore racing,” said J/Composites president and J/11S project leader Didier LeMoal. “Nearly all our models between 9 and 16 meters have thrived in very demanding events like the double-handed Fastnet, Round Britain and Middle Sea Races.  We’re excited to launch a boat that’s even further optimized for short-handed racing. We based our idea on hull designs that we know to perform well on every point of sail and in all the different conditions. At that point, all we had to do was design a fully dedicated deck layout, so we adopted the solution of a tiller rather than a wheel on this boat, with the notable addition of two rudders so as to simplify the handling for one or two people.”

The J/122E Performance Cruiser
The J/122 is probably the most successful 40-foot IRC racer of her generation, with fully crewed regatta successes in Europe, America, the West Indies and Australia. Recently, 122s were the Overall winner of the 2014 Rolex Middle Sea Race and class winner of the 2014 Sevenstar RORC Round Britain & Ireland Race.

She has also proven immensely popular with the single-handed and double-handed fraternity; an easily-driven hull and powerful yet manageable sailplan, allow the solo sailor to maintain race winning pace. Now, for 2014, the J/122 has been given a new lease of life. The J/122 Evolution benefits from a new interior and exterior design that is both refined and modern. These changes have been made in collaboration with the Roséo Design studio. 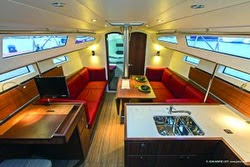 Didier Le Moal, of J/Composites in France, said, “The J/122 no longer needs an introduction. It’s a boat that has proven its worth in terms of fast cruising and boasts a series of fine race victories. Its seaworthiness remains unsurpassed, but it seemed important for us to adapt the J/122 to the current climate.  Together with the Roséo Design firm, we’ve given the J/122 a thorough re-design inside and out. Now, the interior has an uncluttered, clean Scandinavian-like design, giving a more luxurious feel, along with a revised bathroom and navigation station, and the exterior now features hull port lights. The J/122E is quite simply more modern and is sure to fulfill the needs of an ever more demanding clientele”.
For more Southampton Boat Show information.

Newport Boat Show
Held in Newport, RI, the boat show runs from September 17th to 20th at the Newport Yachting Center along the downtown waterfront.  The boats are located along the water in the center of the show.  Featured will be new J/97E, the new J/88 Oceanvolt, and the new J/122E.

The J/88 Oceanvolt Daysailor
This J/88 is the first “green”, eco-friendly boat produced by the J/Design team.  Building upon the extraordinary versatility of the standard J/88, the two most significant enhancements are the self-tacking, roller-furling jib that has just one line led aft for very easy short-handed sail trim and the electric power system.  The inboard power features Oceanvolt’s innovative, fully integrated SEA electric motor system (Silent Electric Autonomy).  As a result, you have silent power on-demand getting into and out of the harbor.  And, extended passage-making is possible using a combination of (i) the novel SolarCloth System from UK Sailmakers France, (ii) an array of Sunbeam Sunpower solar cells; and (iii) the ability for the Oceanvolt motor to use the strut-drive propeller for hydro-electric power generation to supply the high-performance Valence Technology battery bank.  Controlling the entire system is Victron Energy’s Blue Sea charge controller that is a state of the art remote diagnostic and service interface that lets you check your boat’s status from anywhere in the world over the Internet! 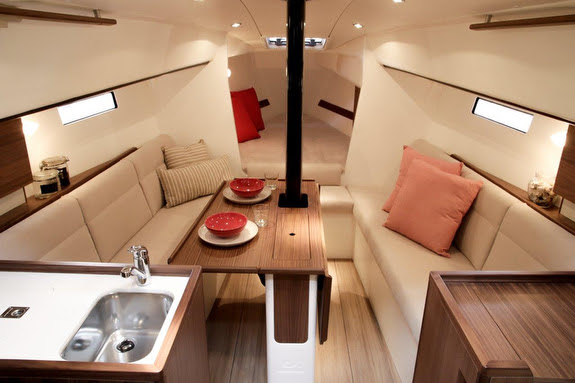 The J/97E Cruiser Racer
Like its larger sistership, the J/122E, the new edition of the J/97 builds upon one of the most popular and successful offshore 32 footers on the European IRC circuit.  With the talented Roséo Design firm overlooking the transformation, the new J/97E features the enormous, comfortable J/111-style cockpit with a large 40” wheel for fingertip control.  Plus, the new interior design conveys the feeling of an extraordinarily wide, spacious living room with windows looking over the sea.

Out Sailing the new First 18 from Beneteau (video)